See What You Can

On my very first trip to the nation’s capital, the whirlwind method by which we toured the city and surrounding regions often left me bewildered and confused. I didn’t have a map, much less GPS, to identify where we were from stop to stop and the view out the tour bus windows wasn’t always clear. I recall many of the locations we visited, from lunch at the American Art Museum to meetings deep within the Pentagon (see Cherry Blossoms from June 2021), and a day spent in playful and practical exploration on Capitol Hill. I think I may have visited a John Hopkins facility, or at least listened to a John Hopkins lecturer. And by “listened,” a more appropriate verb might be “nodded off repeatedly.”

I’m certain we visited the original Air & Space Museum on the National Mall. We visited most everything on the Mall, although our outing pre-dated the Korean War Memorial, the Holocaust Museum, and likewise the World War II Memorial, and the Martin Luther King, Jr. Memorial. Our visits to exhibits, versus the lectures, often involved a 17-minute pop in, or a 23-minute stop. An outing might be akin to, “Oh, look! The Spirit of ’76 aircraft and the Lunar Module. Okay, everyone back on the bus!” In fairness, that’s how the District of Columbia is. There just isn’t time to see everything in one week so you see what you can while you’re there (see On The Other Side Of The Hidden Map from September 2022). 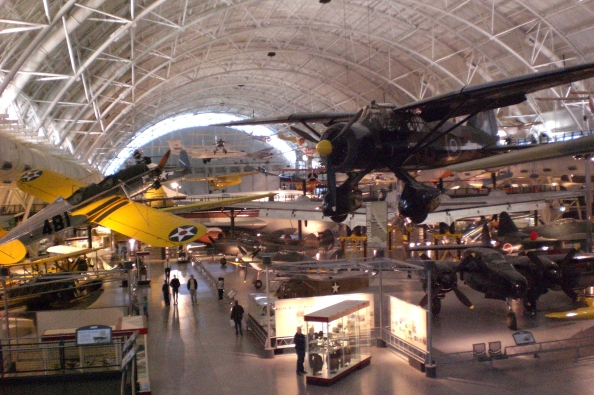 Once you’ve visited someplace, any return visit is either rehashing what you enjoyed most, or checking out what you missed the first time. Going back to a beach house year after year is more of the former. Visiting Washington, DC ought to include more of the latter. There’s so much I missed during my first week in the city, not to mention all the new exhibits, structures, monuments, and memorials. For example, I returned to the original Air and Space Museum at least three more times, each time taking in more and more of what I missed on my first outing. On the latest return trip, however, the new hanger near Dulles Airport beckons, even if I am not an airplane aficionado.

Two layers of aircraft fill the cavernous space, some parked, and some mounted from the ceiling to view as if in flight. For a plane buff, it might be nirvana. For me, it’s plane after plane after plane. I do find a few of interest: stealth aircraft, the retired Concorde of Atlantic crossing fame, and the Enola Gay. The exhibits feel static, stationary, and stoic, not evoking the sense of adventure the original museum entices. There’s little sense of slipping the surly bonds of Earth and taking giant leaps for mankind. Yes, it’s one more DC distinction I check from my going-back list, but it left me ready to get over to Dulles, board my flight home and slip uneventfully into the sky returning to my own space.