During my cruises to Alaska, I hop easily to British Columbia and Yukon Territory.  Alberta mirrors the Montana Rocky Mountains that run the length of the continent and from the divide, the cliffs taper down to the farm lands and oil fields similar to the Big Sky scenery to its south.  Continuing along the northerly latitude, I always wanted to visit the northern Boreal forests of Saskatchewan, but never made it farther north than Regina.  I expect the trees would be grand and fragrant, while the southlands were bland and brown, but it wasn’t harvest season.  Six months into the year, when I crossed into Manitoba, the buds and blossoms beckoned and brightened the Peace Garden Park (see Always Bring Your Passport from March 2020).

Much like the states, Canada offers a myriad of settings, and some day I want to cruise the eastern islands to glimpse the lush landscapes similar to the Atlantic coast of Maine (see Penobscot Narrows from February 2015).  For my first visit to Canada, I crossed into Ontario at Sault Ste. Marie, then traveled south from Sudbury, otherwise I would also tack on Quebec.  (I nearly came close on my visit to the Finger Lakes of New York, too, yet it still remains to be seen.)  Before planning a journey to the next providence, my current itinerary guides me shore to shore as I skip along the edge of each of the Great Lakes (see OMES from March 2012), with Lakes Huron and Ontario easier to access from the northern side. 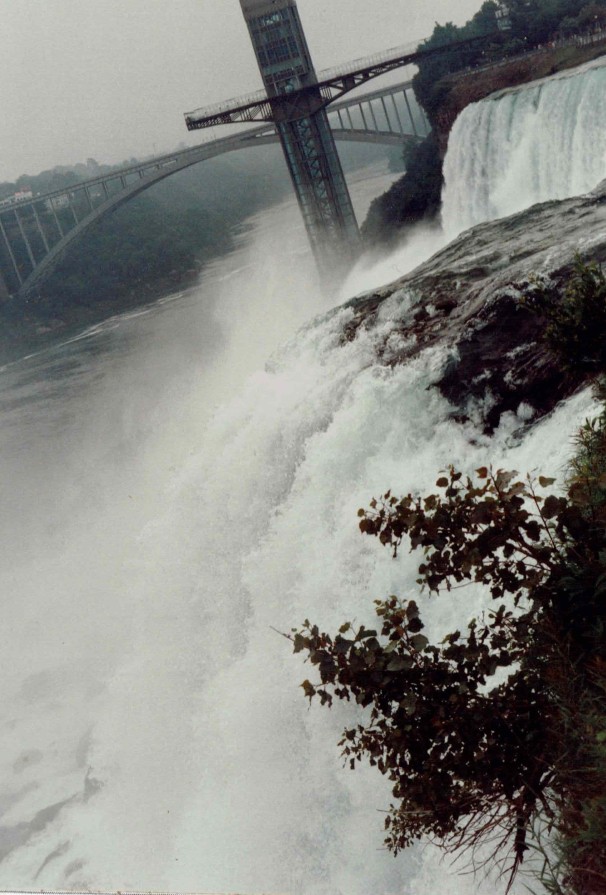 After an early morning thunderstorm (see Brock University from January 2012), we make a direct path into the United States rather than attempt to cross at Niagara Falls, and instead work our way back to Goat Island.  The day’s drizzle follows us to the river that replaces the 49th parallel as the boundary between the providences and states.  While tourists speak of the mist that lifts up from the falls, a mist falls from above after the summer showers.  A lingering rain fall keep the crowds away and allows us to explore Niagara Falls State Park without the intrusion of summer throngs, only the occasional jogger in the mist’s midst.

The morning’s sight, just the first stop in a long day’s drive, where people come to watch water tumble from Lake Erie to Lake Ontario, will remain a once-in-a-lifetime detour, one that ought to be more than a roadside attraction.  The low clouds and the lower droplets deposited throughout the park eliminate the chance of refracting rainbows across the American Falls, and the raincoats worn on the Maid of the Mist pull double duty, that is, if time would have allowed for a lower falls excursion.  Instead, we ignore the moisture in the air in exchange for the moisture of the setting.  For all the opportunities to visit our northern neighbor, occasionally even stateside scenery is shortchanged, too.

One Reply to “Niagara Rain Falls”