While not the highest on my bucket list, Shenandoah National Park, for public land enthusiast like me, ought to be a don’t-miss park.  But north western Virginia took a while to reach.  Many places in the Appalachian Mountains nestle in mountainsides and take a number of twist and turns of smaller roads to reach.  (See “Almost Heaven,” July 2012.)  I managed to make it to several close to SNP, but not close enough, including Harper’s Ferry and the National Mall.  I often meant to visit, it just never worked well into my other excursions.  I may not have tried that hard.

In fairness, I knew its proximity – its general location, perhaps – but I never bothered to calculate how close it actually compared to other places along my trip.  Again, this is probably because it never reached the status of a high enough priority to allocate time for a visit.  Relegated to one of those, ‘I’ll get there eventually’ national parks, more often it crossed my mind when watching NCIS (weren’t bodies always being found there?) than when planning a vacation.  Even when Shenandoah finally made it to an itinerary, it fell as one park among three other national parks, five state parks, and seventeen states.  I hate to refer to its beauty as a blip, but this might be the only way it ever made the docket. 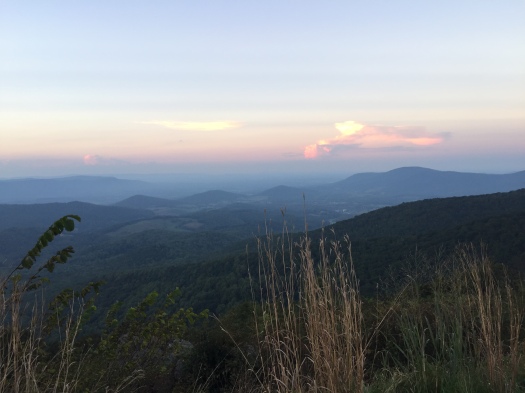 Calling Me All Along

Somewhere between North Dakota and Florida, I allocate a night of camping along the Skyline Drive in Shenandoah National Park.  My planning for the stop ranks so moderately, I don’t even make a camping reservation.  I just show up on Sunday night and think I’ll ask at the entrance if a spot might be available.  When I pull into the Matthew’s Arm Campground and set up camp, the surroundings bustle like most national park facilities, yet the tall trees provide one of those coveted hardwood hammocks that look fabulous out the top of the tent.

The following morning, however, I immerse myself in the park I’ve spent a lifetime overlooking.  I play a version of the old ballad, “Shenandoah,” on repeat, which it turns out I already own three versions of the song.  Maybe the notion calls to me for a while and I’ve simply ignored it.  I drive with the window partially lowered as the cool autumn air, the occasional morning fog, and the random falling leaves embrace Delano (see “Delano,” January 2020).  At the Blackrock Summit, my four-legged hiking companion and I depart for an excursion along the Appalachian Trail.  The drive may offer plenty of beauty and enjoyment from the comfort of my vehicle, yet finally making time to visit, I want to absorb this park, its mists, its rock formations, its views, its shadows, and its fragrance in case it never again makes it back on my itinerary.