As a child, the most fun birthday celebrations included chocolate cake and a trip to Organ Stop Pizza.  After placing an order, we’d sit family-style at the endless rows of checkered table cloth-covered picnic tables dotted with red glass candles.  On the wall, near the high ceiling, we watched for the numbers on the wall to illuminate in a rainbow of colors until our order number appeared.  The moment it illuminated, we would pester Dad to go and retrieve our pizzas and he returned with big metal pizza pans covered with melted cheese and tasty toppings.  And the pièce de résistance would be the enormous, mighty Wurlitzer organ connected to hundreds of pipes, a player piano, a glockenspiel, a xylophone, a compacted timpani set, and an animated bird cage.  The simple sing-a-longs would blare throughout the hall of picnic tables, and even “In The Good Old Summertime” could not compare to the “Chattanooga Choo Choo,” complete with full engine introduction.  You cannot even imagine the decibel level of “Toccata and Fugue in D Minor,” my personal favorite.

No matter how many times we convinced our parents to take us to Organ Stop, we never went often enough.  We loved when out-of-town family would come to visit so we could be sure to take them to our favorite establishment.  We would submit all our most beloved song selections, even if they were the same standards the organist would play regardless of whether or not we requested them.  The colored lights would illuminate, and continue counting even after we had finished our pizza, and we would practically fall asleep on the drive home because we wanted to stay as late as possible and enjoy as much of the ambiance of the pipe-filled hall as possible.  Even through the double-paned glass outside the restaurant, we would hear the hum of the deepest notes and feel the windows vibrate as the music continued to play despite our departure.  And as we drove away we would wonder when our next chance would be to return. 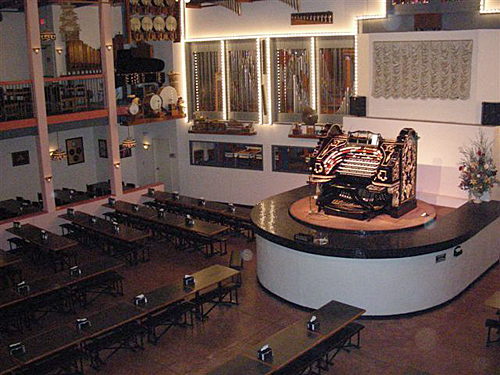 More than two decades later, my return to Arizona includes a stroll around Arizona State University, a visit to my old residences and schools, and dinner with an organ and pizza.  Except the original location where we had spent numerous celebrations had since shuttered its doors, leaving us to track down the even larger recreation on the far side of the Valley of the Sun.  Nonetheless, I want my sons to experience the excitement of watching the colored numbers blink until we know our pizza is finally ready.  We arrive before the first note of music so as to not miss a moment of memory.  But despite the familiar colored numbers and the lengthy picnic tables with red glass candles, the new and improved Organ Stop Pizza proves to be more than I remember.

As the pipes blow their first musical blast, the Wurlitzer rises from the “basement,” and rotates to reveal the same organist who began his pizza-playing career when I celebrated my first Organ Stop birthday in the early 1970s.  But his repertoire now includes a vastly more broad selection of stylings, including, at the request of a group of graduating high-school seniors, “Bohemian Rhapsody.”  And in the upper balcony (yes, this locale even includes a second story), a wedding party celebrates with special tunes, hot, melted cheese on metal pizza pans, and tuxedos.  We stay until the last pipe blows, until the pizza is cooled and its cheese solidified, and until the colored lights stop flashing – a fete of endurance I had always wanted as a child – and regardless of their lack of overwhelming excitement that I always recall, I share some pizza, a wedding, and a little Queen with my boys at a restaurant synonymous with the colorful, tasty, musical delight of my childhood.