In a humorously bizarre film that features the stylings of the great costume designer Edith Head, Dead Men Don’t Wear Plaid blends classic film noir clips with twentieth-century Steve Martin antics.  The story line, while sometimes challenging to follow in order to tie together the old and new, climaxes with the destruction of key US cities, and the first to fall is Terre Haute, Indiana.  Poor Terre Haute, the protagonist muses, and they were just about to get a public library.  So what does Terre Haute have?  A prison, a couple post-secondary schools, yucky tap water, and a funky smell – at least it did a couple decades ago when I first went to college.
Admittedly, I began my college career on three simple premises: my college did not require math to graduate, my college offered me a little scholarship, and my college hosted Florida-based corporations offering internships and a ticket out of the Midwest.  I have select memories about my year and a half along the western edge of the Hoosier State, most of them dull and lifeless.  I remember the names of no one with whom I went to school, I remember skipping class if it was snowing too hard, and I remember living in a ground-floor dorm next to the railroad track.  I remember hating it (see “Conan the Hoosier” from February 2012).
Into The Darkness 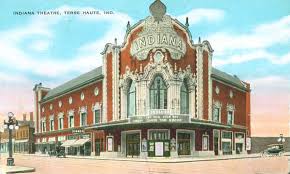 In the heart of the city, just a few blocks from the campus, stood the Indiana Theater – a 1922 throwback to the classic movie houses where the silent films illuminated the cinema bringing it to life, where Movietone News had brought the War to the American Heartland, and where the motion pictures of the waning decades of the previous century allowed me a brief escape from my studies and the miserable dorm life that accompanied my collegiate experience.  If one arrived in time for the early show, the second show would be free to those who stayed; of course, the second film was a repeat of the first film.  Nevertheless, my dorm mates spent nearly two weeks at the old building watching Patrick Swayze sweep an average-looking girl off her feet in the Catskills twice a night.
This theater, which I remembered being larger than its current photo suggests, lifted upward into the heights of the first balcony, and onward into the darkness of the second balcony.  I never recall getting a good look at the ceiling, nor did I ever venture into the first balcony.  I vaguely recall dark cloths stretched over walls and seats to keep patrons out of the upper reaches of the now historic landmark. The structure, like my first college experience, draped its shadowy, gloomy pallor over what ought to have been an energizing time of my life.  The coeds generally believed that bats lived in the upper levels, despite the obvious absence of guano and my never seeing them, but its dark mystique made the building perfect for such tales and the ideal space to watch a scary movie.  Maybe we’d even stay beyond the bewitching hour to be scared again during its encore performance, although looking back, my life in Terre Haute may have been its own horror story.