Many cities may consider themselves the gateway to something even bigger.  Ellis Island served as the front door to millions of immigrants.  Clusters of “gateway cities” hover near the metropolises of Boston and Los Angeles.  St. Louis’ skyline screams “Gateway to the West.”  And just a few underground bus stops away from the Pike Street Market, teeming with purple jerseys headed towards CenturyLink Field, on an autumn afternoon I meander my way to a small, square, two-story display inside the converted old Cadillac Hotel that serves as the historic gateway to the Great White North: The Klondike Gold Rush National Historic Park.  This über-progressive, sleek city on Puget Sound became the jumping-off point for the gold seekers of the late 19thcentury.
At this Seattle unit, the importance of the city’s role in the expansion of the forty-ninth state shines like the bullion bars stacked in the front window.  Seattle can rightly take credit for being the best place to gather and prepare for the journey northward, but just as rewarding, the boom in Seward’s Folly and the Yukon fields beyond it, brought growth, energy, and excitement to the Emerald City.  Nordstrom, the man, not the store, set off for the frozen ice fields and the fortune and glory they promised, and then he brought his fortune and glory back to Seattle.  As Erastus Brainerd of the Seattle of Chamber of Commerce professed, Seattle was the point of departure.
All That Glitters

The path to riches in the Klondike gold fields required more manpower than most men possessed.  Dozens of hikes up and down the Golden Stairs of the Chilkoot Trail broke the backs of men trying to enter Canada with a thousand pounds of goods strapped to their spines.  Likewise, the horse power of three thousand horses failed as these beasts of burden fell to their deaths along the lower, but narrow and harrowing hike over the White Pass summit.  Seeking gold in the Klondike truly fit the adage of the desire to succeed, “…or die trying.” 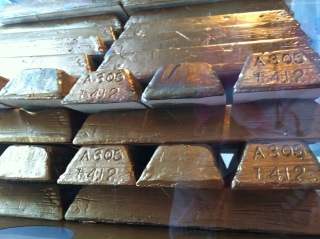 Unfathomable to me, as I stand in the cozy shelter of this most southern piece of the Klondike historic tour, may be among the scores and scores and bustling bodies that crowded into Seattle, then Skagway, then the Yukon just before the turn of the century.  Battling the stinging, wretched, blistering cold, only a small percentage of these prospectors actually found their richest dreams realized when they finished sailing downstream on the Yukon River.  An epic journey’s inspiration and steely-cold ambition must have driven these hearty souls to pursue an adventure full of peril and only minimal possibility.  I adore a great adventure, but witnessing the passion and endurance they mustered to reach the western edge of the Canadian territory, I flatly admit I would have not braved what they braved, embraced the struggles they embraced, or pushed myself as they pushed themselves for a Klondike bar – no matter how it glimmered and glistened and glittered.