Florida has no basements, no tunnels, and no subways.  The water table, the level at which water is present underground, makes these subterranean constructs impossible.  Most office complexes and housing developments include retaining ponds to collect the water that otherwise sits on the property.  The first time Son #1 rode the subway in Washington, DC, he found the process of moving below ground unnerving and unlike any he had experienced.  Eventually, the “bing bing” chiming of the signals as the doors opened and closed brought enough amusement to distract him.

My first solo experience without a rental car, also courtesy of the DC public transportation system, included a bus from Baltimore-Washington Airport, the Green Line into the center of the nation’s capital and then a swap onto the Blue Line under the Potomac into Arlington.  It’s not that I never used public transportation (I used to ride the city bus to and from high school), but combining air travel, shuttle buses, and multi-colored subways without any previous frame of reference seemed gutsy for a suburbanite like me.  In hindsight, the rest of the world calls my adventure “commuting.”  Florida’s water table does not garner any points with the rest of the country’s metropolis populations. 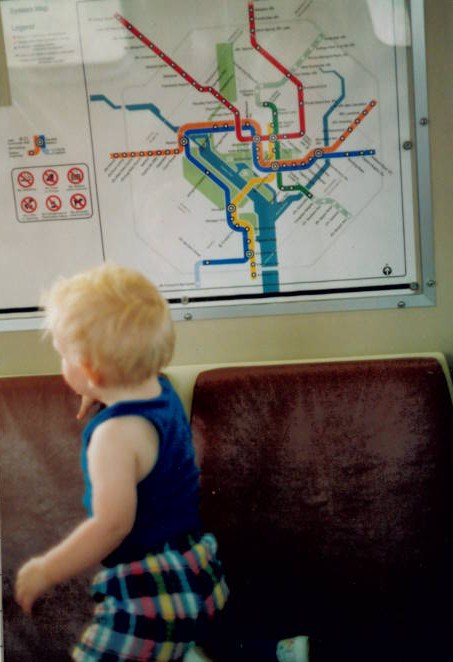 So now I feel confident to bust a move in other major cities.  In Chicago Son #2 and I also use the EL to get from Midway to the Loop.  Other than the stairs being a bit of a huff and puff for us with our luggage in tow, we manage to switch through the rainbow of stations that get us across the street from our hotel.  But on each train, we notice a theme: peacoats.  As if the entire city of Chicago has a uniform; everyone wears them, with relatively few trench coats interspersed and virtually no color to be seen.  Clearly my magenta double-breasted ensemble identified me as a tourist even more than my suitcase.  And just to show my comfort level with my public transportation skills, I am less concerned with the stops and more concerned with the attire.  I am easing into this subway flow.

By the time I traverse Boston’s subway system, I ride like a pro.  Before I even get to the subway station at Logan, my fellow shuttle passenger asks for route assistance.  Of course, I don’t find it too difficult to discern that the bus to the subway is not the Blue Line, so consider the source.  Nevertheless, I find myself already on the train while he still navigates the purchase of his fare.  But the final proof of my mastery of the big-city travel comes after the Red Sox loss when thousands of loyal fans cheerfully wait for the three single-lane stalls through which each person must pass.  Singing “Sweet Caroline” in chorus and enjoying their commute as if they were still downing a brew in Fenway, I sing along because DC, Chicago, and Boston help me earn my cross-town commuter stripes.