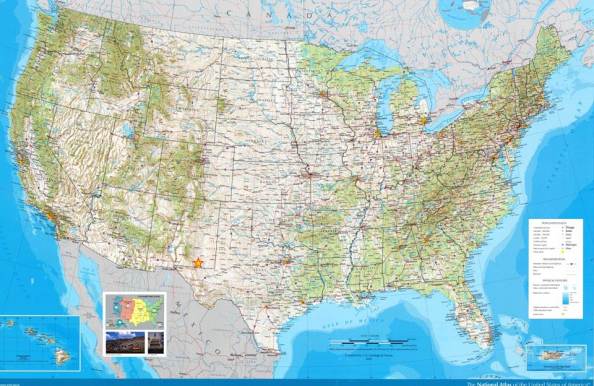 Carlsbad Caverns rank as my most favorite caves, partly because they are the first caves I ever explored, but mostly because they are grand and open and completely unclaustrophobically enjoyable (see Hidden Beauty from March 2012).  When I had the body of teenager, I squeezed through some much tighter openings to see caverns in northern Arizona, but on my road trip to the American Southwest, I chose to skip reliving that childhood experience.  Instead, I drove Son #1 and Son #2 near the Texas border to descend into my favorite caves.  And in advance of our day below the earth, I convinced the boys to drive out the night before to see the bats take flight into the darkening night.

We sat in an open amphitheater on historic and uncomfortable stone benches curving toward the entrance of the cavern.  We listened to a park ranger who seemed more of an angry, rule-follower than any park ranger I have ever met.  (Pun intended, I have to believe he was bat-shit crazy the way he treated us simple tourists, to use my brother’s terminology.)  We turned off every electronic device we carried – our cell phones, our cameras, everything – so as to not distract the audio-stupendous bats from finding their way to the river where the mosquitos foolishly gathered to be dinner for a million hungry flying mammals.  And we waited, watching for the first early birds to lead the rest of their relatives out for their midnight adventure.  And we waited, sitting nearly silent so as to not to disturb the swirling, spiraling pattern that would soon rise above us.  And we waited, wondering if they were ever going to make an appearance. 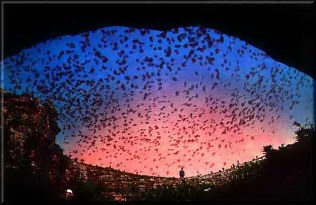 First one or two, so swift and darting, that I do not even see them swoop and swirl.  And with a reprimand from the ranger, the onslaught of little black creatures forms an exodus from the dark depths of the cavern over our heads.  And in the dark, moonless sky, in the middle of the New Mexican desert, we squint our eyes to see the never-ending stream of creatures faintly silhouetting themselves against the last light of dusk.  Their collective flapping and high-pitched squeaking emit far less sound than a million of any other creature might generate.  And they continue to pour forth from their deep recesses disappearing into the darkness.

Families with small children, who manage to keep them still as long as imaginably possible (despite the admonitions from the rotten ranger) are the first to follow the bats and depart into the night.  And much like the bats, once one departs, a continuous wave of tourists take flight in their minivans and rented campers.  But we wait, to see how long the bats continue, and I plan to stick it out until they have headed southward.  And we wait as more people depart, vacating their cold perches on the hard stones for the luxury of their car seats, and later their warm beds.  So we wait, watching the dark swirls seemingly dissipate, but in truth, against the black sky, the flying rodents are nearly invisible and may still be overhead, but we cannot tell.  We wait no more, and we succumb to the darkness of a late summer evening, leaving the bats to their night of frolicking and feeding.