Even for a mildly obsessive calendar watcher, birthdays sometimes sneak up on me, and in my Hallmark stash, I keep a couple belated greetings in case of forgetfulness on my part.  But a landmark birthday – 100 years – surprised me without my preparing for the big day.  The state of Arizona, the last of the contiguous states, just marked its 100th anniversary of statehood.  Compared to the east coast states, it is just a pup; compared to Europe, the Grand Canyon State just completed its infancy; when measured against the advancement of mankind, the formation of the planet, or the creation of the solar system, a century of existence represents a mere blip on the evolutionary radar screen.  But nevertheless, it’s a blip worth recognizing since in a tiny way, my childhood fell somewhere in the middle of Arizona’s history as a state. 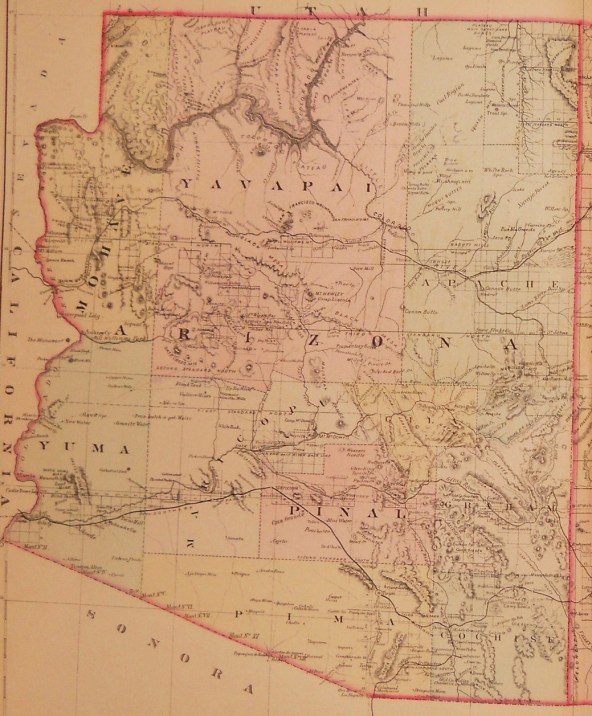 Growing up in this Sonoran oasis provided a similar experience to most childhoods, but our education may have experienced some regional modifications. In science we studied the botany of cacti; as part of our state government class we learned desert survival skills, and geography included memorizing the names of all the counties and county seats – all fifteen of them.  At home we knew how to secure our property as a dust storm blew up from the south darkening the sky and erasing the mountains from our view – a great fete since mountains could be viewed in every direction.  The powerful desert also delivered an explosion of saguaro and prickly pear and ocotillo blooms in yellow and orange and red, and sunsets that swept across the sky coloring our lives.  After all it gave me, how could I have forgotten Arizona’s birthday?

The legends of the southwest – the cowboys, the drifters, the outlaws – seemed like a remnant of a distant past lost to the closing of the American frontier.  Those characters, mostly real but with legendary amplification, lived in the New Mexico territory after the Gadsden Purchase and before the nation added the 47th and 48th states.  Credit goes to the unique cast of characters that built Arizona over its century, and witnessed its maturation.  When drawing a timeline of Arizona’s statehood, note a hash mark about two-thirds of the way through its rich history when I intersected its development.  The giant metropolis of Phoenix, still a growing city, felt more cozy back then, and we followed the annexations of the city limits by moving to the edge of town.  Before the first drops of water trickled through the Central Arizona Project, before Lake Powell finished filling, before the supermarkets and supermalls became connected by the concrete commuter loop around the city, I watched the state change like the bundled blossom of the Agave Americana, or “century plants,” growing throughout the region.  What an appropriate flora with a fitting nickname!

During the years after I moved away, people told me I wouldn’t recognize it if I went back.  I remember when Sky Harbor airport had one brown, brick building, when Hughes Airwest was the top banana in the west, and Pioneer Village felt a world away.  After two decades of living in other parts of the country and the world, I finally return possessing only a fractional connection to the state on the verge of its centennial, but with an exponential enthusiasm to revisit my roots.  Overlooking its obvious increase in size, the state’s vibe feels like it has not just grown, but grown up, and finally fits into its big-boy boots.  The surprising joy of returning to Arizona bubbles in me as I reach the edges of the now-expansive city, as I drive through the dramatic changes in scenery above the Mogollon Rim, and as I watch the landscape change from fields of saguaros to forests of pines.  I am reminded not only of my youth, but that I still possess, however microscopic, a footnote in the American West.  And although Arizona’s history affected me far more than I affected Arizona’s history, I am woven into its 20th century adolescence.  Happy Birthday, Arizona, and welcome to adulthood!

One Reply to “One Hundred Years”