Once, in an effort to maximize my frequent-flyer points, I planned a cross-country vacation from Florida to Washington State.  By paying for only the flights from LAX to GEG and return flight from GEG to LAS, I used my freebies to get most of the way there and back for a minimal cost as four separate flights with a couple plane changes on the longer stretches.  When people travel across country, two pools of thought exist: one, “Change planes?  Not on your life,” and, two, “Sure, I’ll change planes; it gives me a chance to stretch my legs and use a real-sized bathroom.”  I willingly swim in either pool.  But on my way west on this particular expedition, I stumbled into an oversold flight and garnered a big bank account for even more future travel – score!  So instead of four flights from MCO to GEG, I flew MCO to SAT to PHX to LAX to OAK to GEG.  I spent a lot of time that day in the “stretch my legs” pool.

It might seem peculiar, but I take my atlas on the plane with me.  Of course, I use and abuse my atlas (see “Traveling With Boys” from November 2011), so understand that I will never own a pocket-size edition.  Because of its size, the atlas lives in my suitcase and spends the duration of each flight in the overhead compartment.  Only when I reach the terminus of my trip, or during my layovers, do I review my planned journey and see the details of my coming adventure.  But while spending time in the layover pools in Texas, Arizona, Southern California, and Northern California, I have an abundance of time to study the maps of Eastern Washington and Oregon, of Northern Idaho, and of Western Montana.  Undoubtedly this might be the onset of utter boredom for many, but for me, some of the most rewarding moments of my travels stem from my curiosity about the places I find on the pages in front of me.  I really am a map geek. 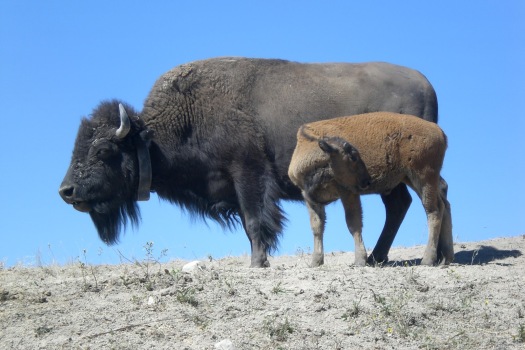 Look What I Found

Despite touching down or setting foot in nine states, one specific destination headlines my vacation: Glacier National Park (see “Went-To-The-Sun Road” from February 2012).  The atlas, already marked with the bright, yellow highlighter of the roads I plan to drive, covers several pages of maps, so I start with the biggest, Montana, to see what lies between me and the end of the route just shy of the Canadian border.  Between Point A and Point B, I find the Nez Perce National Historic Park, Lolo Pass, and – jackpot! – the National Bison Range.

I arrive in Missoula well after dark despite the long summer days, regardless, the next morning I leap to a quick start to dedicate extra time among the bison.  The drive around the range features one of my least favorite attributes: steep climbs with no railings.  A moment of courage (one of many on this adventure) emboldens me and I ascend the narrow one-way, single-lane dirt road well outside my comfort zone.  As the route returns to a manageable height, I round the turn towards the back forty, and the best part of the National Bison Range comes into view: dozens of American bison grazing the fields, crossing the road, strolling with their offspring and breathing heavily just outside my car window.  Five flights and six airports lead to a morning amid the beautiful beasts of the American West – all because I pulled out my atlas in the alphabet soup of terminals.