Closed Road.  Professional Driver.  Do Not Attempt.  Or so the fine print indicates.  But those advertisements show fancy new vehicles skirting the ocean cliffs, swirling through a road of falling leaves, or exploding across the desert as the waves of heat rise and wrap the glimmering speedster.  We want more than that car, we want that driving experience.  These commercials tempt us, pretending our alternate career as professional drivers lay in the ownership of this four-wheel fantasy, but one commute to or from my office reminds me that our collective night job eludes an overwhelming majority of America’s driving population.

Locating a completely abandoned road, however, becomes the greater challenge.  My travels have taken me through several deserts, most of which are purloined by the Defense Department, but the military frowns on my driving on the runways of its test-pilot facilities.  The seagrape-covered dunes along the nearby Florida surfside roads obscure the few paltry waves that reach the cliffless shore.  Do these places really exist, or are these closed roads computer generated? 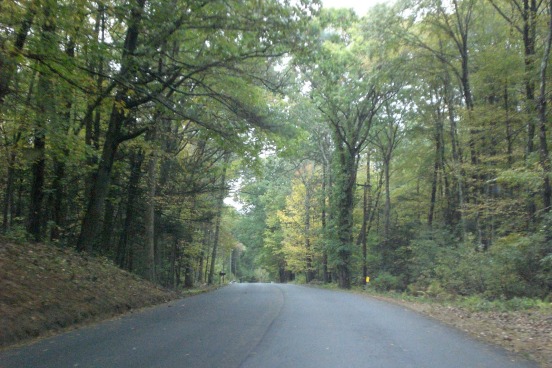 Also known as “summer” in many northern parts of the United States, the peak periods of construction frustrate drivers in our efforts to get from here to there, slowing us down, blocking our way, and detouring us from our destinations.  While Bob obviously has a thriving business, we despise his barricades and their flashing yellow lights.  Yes, we want new, smooth roadways, but please do not impede us to get it paved.  And those painted lines constrict us, telling us we cannot pass the one vehicle leading a long line that refuses to meet, much less exceed, the speed limit.

But I found it.  I found the elusive county road in early October in northeastern Connecticut.  On a midday Monday I passed the only opposing traffic – a mail truck – on the lazy afternoon sweep headed towards Rhode Island.  Despite the warnings of road work, painting the yellow and white parallel pavement restrictions remained the only unfinished business by the men-not-at-work.  With so few travelers, the autumnal droppings formed small piles and with a gentle swerving, I allowed my new-to-me rental car to have its way with the road.  Glancing into the rear view mirror at the spiraling leaves stirred behind me, I imagine the madmen crew captures the moment on film for a future envious image for future sales campaigns.  Open road, outstanding driver.  Attempted.  Succeeded.

One Reply to “Ad Placement”